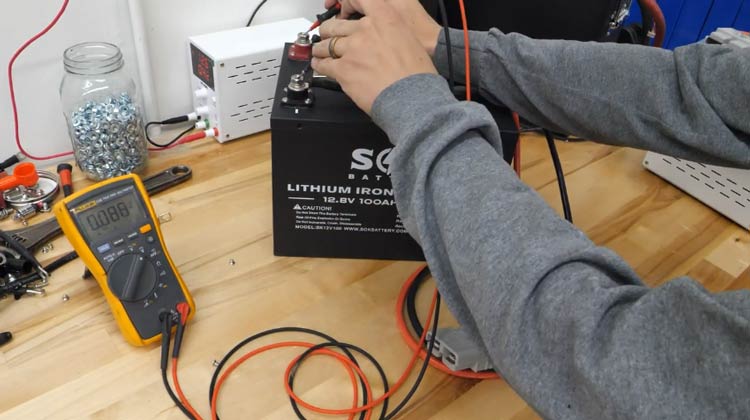 Everybody is well aware of the significance of batteries in today’s world. Show any device that doesn’t utilize either electricity or batteries, and you’ll discover that it’s just impossible. But what if you find your Li-ion battery is dead and you have no spare battery?

Hold on, when you’re thinking about jumpstarting a dead Li-ion battery, you’re going to deal with chemicals and electricity. So, you can’t just take it on hand and finish the job within a few seconds. Hence, it’s time to stick to our article till the end and see what our experts say.

Can You Jumpstart a Lithium-ion Battery On Your Own?

Practically, many people are hesitant about whether they can jumpstart a dead Li-ion battery at home on their own, whether their batteries are suitable for jumpstarting, or if they need the assistance of a professional.

The simple answer is yes. But, it depends on the overall condition of the battery. For instance, you can jumpstart your Li-ion battery only when the cells aren’t dead yet. In general, when the voltage drops below a certain level in the cells, most Li-ion batteries will be disconnected automatically.

On this occasion, the electrolyte inside the battery dissolves the anode and as you recharge, it may result in an internal short that’s really dangerous. If your battery seems dead from the outside, but the cells aren’t, jumpstarting will be effective in this case. Once again, it possesses dangers.

How Much Does It Cost to Jump Start A Lithium-ion Battery?

Before we delve into the details of jumpstarting a Li-ion battery, arranging all the necessary tools is crucial. At the same time, you should know the initial cost of performing the whole process.

You will need materials that seem to be common supplies in the household. In case you wish to buy things fresh and not preexisting, the overall cost to jumpstart a Li-ion battery will be about $150. Here is a typical list of the minimum equipment you’ll need, along with prices on the market.

How To Jumpstart A Dead Lithium-ion Battery

Once you’ve gathered your tools, it’s time to get started jumpstarting your dead Lithium-ion battery. However, we have put together some of the most effective methods to jumpstart a Li-ion battery. Depending on your preference and convenience, you may select among them.

Whether you have to switch any type of lithium-powered gadget on at least several times daily or need to keep it going perpetually for the best outcome, this technique will work. Here is how:

Cautions: Keep in mind that you should have your eyes protected from the flash. In the event of extremely long abuse, you may be at risk of a battery explosion. The cycle should be performed in a wide area since an injury could result from the accident.

The best choice to guarantee the regain life of your battery quickly and safely is a lithium-ion jump starter. Portable battery packs with cables for jump starters you can store in your truck’s storage bin or anywhere else you want to keep them are a good idea. You toss them into the back seat of the car and employ them for several restarts in a matter of minutes.

It’s wonderful to see your car come to life a few seconds after you’ve recently been informed that the battery has died, and all you need to do is just find the starter. As soon as you ask for it, you can get an easy jump start without complications. Follow the steps while using a jump starter:

Cautions: To ensure your jump starter battery booster pack is always up and running, it should be charged at least once every six months and, ideally, immediately the following use.

These batteries will lose power faster, especially during very cold conditions, if left inside the vehicle. In cold weather, always provide your battery booster pack with the power it needs via a charger. And of course, don’t forget to wear protective clothing and never keep your face near the battery.

Yes, you can also think about repairing your dead battery to jump. In this case, you can replace the battery cells of the dead one with cells obtained from another one. When it’s time to replace a burnt-out cell, you will require a cell that works but is normally discarded.

Cautions: Each cell is attached to a circuit but is not immersed and covered with plastic, so be aware that you must not short-circuit it while you are working. So, it’s recommended to use a multimeter to ensure there’s no dangerous residual charge.

You should keep your battery pack in a water-free package and bury it in the freezer for 48 hours with the cable connections still attached. Once it comes out of the freezer, leave it out for about 8 hours to let it return to ambient temperature.

A lithium battery that has been discharged deeply or completely dead needs to be recharged slowly to prevent serious damage. In the event of a sudden surge of voltage, just like that gained via a jump start, it possibly causes severe damage or, in extreme circumstances, even causes the battery to explode or catch fire.

Yes, having a portable Li-ion jump starter can be extremely beneficial to jumpstart your dead batteries.

The lifespan of modern Li-ion battery jump starters is expected to be 2-3 years on average. According to the charge cycle rate set by manufacturers, it’s around 300 to 500 complete charges. However, that doesn’t mean you have to through the starter to a trash can after 2 or years. Rather, it indicates that the power capacity of your jump starter could lower after 300 to 500 complete charges and declining charging performance.

The process by which ions flow and pass to and from electrodes in lithium-ion batteries slows down when they die. This means that the electrical energy that is readily available will be reduced over time, and this limits the amount of power that you will be in a position to use at a critical time.

As long as you thoroughly complete the maintenance needs and your job, your battery won’t fail for a very long time. However, catastrophe doesn’t always announce itself with warning signs.